An Interview with Michael Kleine and Janice Burns, Coordinator and Deputy Coordinator, respectively, of IUFRO’s Special Programme for Development of Capacities (IUFRO-SPDC)
https://www.iufro.org/science/special/spdc/

Michael Kleine has been the Coordinator of IUFRO-SPDC since 2001 and Deputy Executive Director of IUFRO since 2010. He is a forestry graduate of the University of Natural Resources and Applied Life Sciences (BOKU), Vienna, Austria, from where he also obtained his doctoral degree and habilitation in Silviculture. During his career he has participated in natural forest research and management, and rural development through residential assignments in Austria, Pakistan and Malaysia. He also worked as free-lance forestry consultant for the German Development Agency GIZ, the FAO and the European Commission among others in Asia and Central America.

END_OF_DOCUMENT_TOKEN_TO_BE_REPLACED

Interview with four participants of the IUFRO-SPDC/WRI training workshop on science-policy interactions for forest and landscape restoration on 4-6 September 2015 in Durban, South Africa, prior to the World Forestry Congress: http://www.iufro.org/science/special/spdc/actproj/twdurban/ 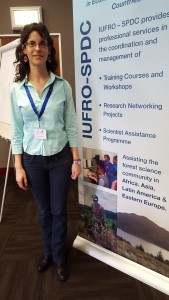 Mercedes Sá is a Forestry Engineer from Argentina. She works for the national government in the Directorate of Forestry. She is not a traditional scientific researcher because her every day work is related with the supervision of conservation and management plans of native forestry resources, including restoration activities, that all the provinces of Argentina approve for the compensation of environmental services under the framework of a National Law. END_OF_DOCUMENT_TOKEN_TO_BE_REPLACED