Alarmingly, blazes fuel their own causes. “A potentially vicious cycle of climate change and fire is emerging,” the report stresses, pointing to a feedback loop of extended droughts, soaring temperatures and desiccating vegetation. The fires further contribute to global warming by releasing carbon dioxide sequestered in trees into the atmosphere, contributing to global warming and further emissions of greenhouse gases stored for centuries in rapidly-thawing Arctic permafrost and degraded tropical peatlands. 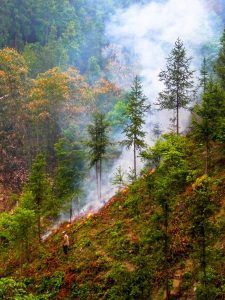 For land-clearing, undergrowth is burned in a forest in China’s southern region of Guangxi. Nick Hogarth, CIFOR

“The warmer the weather gets, the more fires we see,” says Mike Flannigan, a professor at the University of Alberta, director of the Canadian Partnership for Wildland Fire Science and author of the report. “Warmer weather means longer fire seasons and more lightning strikes, and warmer weather dries fuel loads exponentially as the atmosphere sucks up moisture, especially from the forest floor.”

Adding to the combustible mix is the global human population. As the number of people rapidly rises, expected to surge past 8 billion in the next decade, previously undeveloped land becomes urbanized, agriculture expands, and boundaries between urban and rural areas blur.

Scientific evidence and innovation will be in high demand in the coming years as needs heighten for natural resources, food and shelter, which can contribute to unsustainable land management and resource extraction. For instance, a push to convert land to agriculture in Indonesia drained peatlands and helped fuel massive fires and smoky haze in 2015. It is estimated that the fires cost the country more than USD 16 billion in losses, and that toxic smoke and smog killed up to 100,000 people.

“In the interface between society, wild lands and fire, fire is not friend or fiend – it is an element, part of a complex system, and can be life-giving or lethal,” said IUFRO’s Janice Burns. “Sharing and further developing knowledge and tools is essential for finding novel solutions and providing the information needed to make decisions on how best to live with fire.”

In the past two years, for example, fires have blazed across California, seeing a death toll climb to more than 150 civilians and firefighters and scarring the state’s famous wine country north of San Francisco, coastal hills near Los Angeles and small towns in the rural  Central Valley. A policy of fire suppression added to the intensity of the infernos, with dead trees and branches on forest floors proving highly flammable tinder in dry conditions. Year-round fires in 2017 and 2018 led to billions of dollars in damages, with toxic smoke and ash impacting the health of communities hundreds of miles away, damaged infrastructure, and the displacement of thousands of people. In response, California’s governor Gavin Newsom declared a fire emergency in March.

Such fire fallout has been experienced by communities worldwide – many with little previous history of wildfires – as they face hotter, drier weather and other pressures linked to global climate change.

In response, the IUFRO and World Bank report – the result of a three-day Global Expert Workshop in July 2018 – points to the importance of governments planning ahead through international cooperation and management, resource sharing, engaging with communities, applying local-level knowledge of burns, investing in cutting-edge technology and long-term data collection, and new policy and fire management practices. The paper also emphasizes the vital importance of allowing for some fires burn, considered as part of the natural cycle.

“It’s not a one-size-fits-all approach,” Flannigan said. “But from drops in national GDP to ecosystems to food security and the market impact on global trade systems, the world is entering a new reality that demands new approaches to fire governance.”

Download the IUFRO Occasional Paper “Global Fire Challenges in a Warming World. Summary Note of a Global Expert Workshop on Fire and Climate Change” from: https://www.iufro.org/news/article/2019/01/23/occasional-paper-32-global-fire-challenges-in-a-warming-world/

This content is licensed under Creative Commons Attribution-Non Commercial-Share Alike 4.0 International (CC BY-NC-SA 4.0). This means you are free to redistribute our material for non-commercial purposes. All that is asked is that you give Landscapes News appropriate credit and link to the original Landscapes News content, indicate if changes were made, and distribute your contributions under the same Creative Commons license. You must notify Landscapes News if you repost, reprint or reuse our materials by contacting G[dot]Lipton[at]cgiar.org.