More people will more readily do more of a task for which there are higher incentives.

“Incentives are founded on the bedrock of economic calculation,” said Dr. Arun Agrawal. “But what if this ‘bedrock’ is actually shifting sand?”

In his keynote address at the IUFRO 125th Anniversary Congress in Freiburg, Dr. Agrawal will present findings from a forest-related research project in India that found private incentives have little effect, information has negative effects, and collective incentives have positive effects on recipients.

The effects we found, he said, are consistent across motivations, behaviors, and forest condition outcomes.

Informing villagers through individual and group discussions about the need for conserving forests – and information-based effort for conservation – had negative impacts. Providing them with small amounts of in-kind private benefits such as seeds, fertilizers, chickens and fencing materials had zero or small negative effects on conservation motivations. But collective benefits such as infrastructure maintenance and watering pints for cattle in different neighborhoods had clear, positive impacts.

“Incentives occupy a hallowed place in the arsenal of policy makers for achieving desired policy goals,” he continued. “The higher the incentives, the higher the likelihood of achieving the aimed for target, or so the belief goes.”

If that basic assumption is wrong, “it calls into question the foundations of some of the most innovative and promising forest governance and improvement schemes of the 21st century – reducing emissions from deforestation and forest degradation, for example, and more generally, payments for ecosystem services,” he said.

His keynote address is entitled The Perverse Outcomes of Incentives for Forest Conservation.

The lecture will present the results of program implementation as a whole, but also of the different arms of the program:

the effects of these efforts on the motivations and behavior of target households and also on the condition of the forests that the program sought to govern and protect. 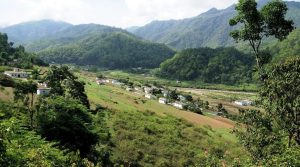 Village in the Indian State of Uttarakhand

“These points are important to make because they suggest the need for caution before we rush to embrace payments for ecosystem services as a general solution for addressing environmental and conservation challenges,” Dr. Agrawal said.

“They call into question the ready assumption that human beings are simply rational economic actors, ready to dance to the tune of the holder of the purse strings.

“It means that you should test your assumptions for the context in which you are working. Theories are just that. They and their predictions need testing under multiple conditions before large scale implementation. Monitoring policy implementation is critically necessary, and adjustments in implementation even more so,” he said.

“The idea that small amounts of private incentives to achieve environmental goals are possibly pointless, is founded in a substantial body of conceptual and experimental work on motivational and behavioral crowding,” he said. “Our analysis takes this body of work and shows its relevance to forest conservation and forest managers.”

The findings indicate that incentives are not a panacea; that providing more, better information may not achieve desired goals of conservation and forest management; and that collective incentives may work at times and in some places. So, he cautions, one should look before leaping to embrace the latest flavor-of-the-month in policy making.

Dr. Agrawal hopes that some audience members will find the results of the research provocative and will examine assumptions as to what makes human beings think and act the way they do when it comes to the social good of environmental conservation and protection.

He also expects that some will not be so inclined, though he hopes that those who disagree with the general thrust of the work will think about the reasons for the findings, and whether there is some basis to wonder if these findings might be relevant elsewhere.

And, he added, “that is good because thoughtful disagreements are the basis for advancing knowledge and practice.”

Researchers are, on the one hand, skeptical scientists who want solid evidence before drawing general conclusions, he said. On the other hand, many of us also believe that people are essentially good and there is a streak of altruism somewhere in us all.

“But I do want to emphasize that many of the features we take for granted as basic human nature – for example, that more human beings do more of a task when presented with higher incentives and better information – may be learned behaviors that are contextually dependent,” he said.

Dr. Agrawal is Samuel Trask Dana Professor of Sustainability and Governance at the School of Natural Resources and Environment at the University of Michigan, Ann Arbor. He also coordinates and is the co-founder of the FLARE (Forests and Livelihoods) community of practice. In addition to teaching, he serves as the editor-in-chief of World Development. Dr. Agrawal is the author of Greener Pastures and Environmentality, and his research has appeared in American Political Science Review, Conservation Biology, Current Anthropology, Science, and World Development among other journals.