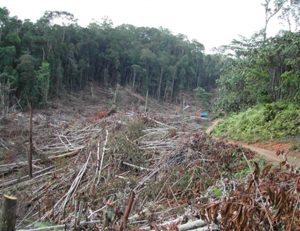 In the first presentation, John Stanturf (US Forest Service) explained the potential benefits that forest landscape restoration can have on mitigating as well as adapting to climate change. These included aspects such as diverse species and structures at stand scale; age classes of tree vegetation at landscape scale and connectivity.

Andreas Bolte (Thünen Institute, Germany), presented the scope of work of the IUFRO Task Force which includes a retrospective knowledge gap analysis, research on adaptive measures, and the plans to develop a best practices guide on forest restoration of adaptation purposes.

Lei Xiangdong, (Chinese Academy of Forestry, China) explained the results of a long-term stand growth and thinning experiment on resilience to drought, individual tree diameter growth and mortality of semi-natural Larch-Spruce-Fir Forests in Northeast China. The data collected over 25 years showed that there are significant interactions between climate and thinning intensities. More intensive thinning regimes could help increase drought resilience of these natural stands.

Promode Kant (Institute of Green Economy, India) elaborated about the challenges of restoration and adaptation in the Hindu Kush-Himalayan Mountain Region. 25% of the mountain region is forested, but most of the areas are largely degraded today. Migration of plants to higher altitudes due to changing climate in combination with overexploitation has resulted in changes to the composition of many species of medicinal value such as caterpillar fungus and ginseng. Countermeasures would include, inter alia, intensification of forest management, control of pest and diseases and reforestation with the aim to create new income opportunities for local people and thus contribute to improved livelihood.

David Boshier (Oxford University, UK) in his presentation titled “Local Best – Do Local trees perform better than Other Trees” asked the question, “What is local in terms of adaptation to a changing climate?” Based on a systematic review of published literature, he highlighted the importance of long-term provenance trials (many started as early as 1890 under the umbrella of IUFRO), in order to identify sources of reproductive material for restoration that is resilient to on-going climate change.