The 17th meeting of the Conference of the Parties (CoP 17) to the Convention on International Trade in Endangered Species of Wild Fauna and Flora (CITES) took place from 24 September to 5 October 2016 in Johannesburg, South Africa. It was the largest CITES meeting to date, with more than 3,500 participants representing 152 governments, international organizations, non-governmental organizations and media. (http://www.iisd.ca/cites/cop17/)

The CITES CoP 17 was opened on 24 September by the President of South Africa, Mr. Jacob Zuma. The Agenda for the formal Committee meetings and Plenary meetings included 90 agenda items; 64 countries had sent in 62 species-listing proposals (adding/moving species to CITES Appendices I, II or III). 51 Proposals were accepted, 5 rejected and 6 were withdrawn. Resolutions and decisions referred to strengthening actions to combat illegal wildlife trafficking. The decisions to bring all 8 species of pangolins and marine species such as devil rays, silky sharks and thresher sharks under CITES trade controls were considered as the biggest successes of the conference.

Regarding tree species, it was the first time that CoP decided to add more than 350 species of rosewood, i.e. all species in genus Dalbergia, under CITES Appendix II, thus placing trade restrictions on these rosewoods. Appendix II lists species that are not necessarily threatened with extinction now, but may become so, unless the trade is closely regulated. 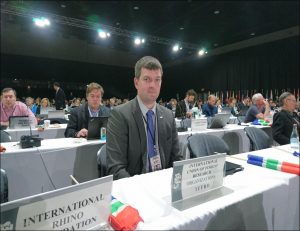 The IUFRO-led GFEP Rapid Response on Illegal Timber Trade was represented at the CITES CoP 17 by Project Manager Mr. Andre Purret. IUFRO had been accepted as an accredited observer to the CoP and was, thus, represented in the Plenary meeting hall together with the other approved observers.

GFEP also had an opportunity to present on the current Rapid Response assessment on Illegal Timber Trade at the 27th INTERPOL Wildlife Crime Working Group meeting during the Forestry Crime session on October 2 (see Agenda). The meeting started with a welcome address by CITES Secretary-General Mr. John Scanlon.

During the afternoon Forestry Crime session GFEP’s Andre Purret gave a 20 minutes’ presentation about IUFRO, GFEP in general and about the current GFEP RR on Illegal Timber Trade. He gave an overview of the process of GFEP RR, went over the broad table of contents of the draft assessment report and advertised the launch of the Report and Policy Brief in CBD COP 13 in December 2016. The audience was mainly comprised of representatives from the law enforcement sector – customs and border control officers, people from various justice departments around the world, INTERPOL staff from various countries, other government officials. Most participants were not familiar with IUFRO, but they showed great interest in receiving the final GFEP RR report through the mailing list of the INTERPOL Wildlife Crime Working Group.