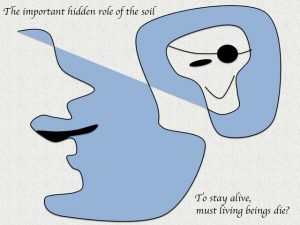 The new living structures are the result of the re-elaboration of the old ones. Soil plays the main role in the process. So, humans who endanger life on our planet express a severe disagreement with a natural harmony that risks triggering negative feedback for the species. This always occurs to other species, why shouldn’t it happen to us? In: Zanella et al., 2018. Humusica 1, article 1: Essential bases – Vocabulary. Applied Soil Ecology, 122 (Part a), pp. 10–21.

Most people think of soil simply as something that grass, trees and other plants grow in and on.

But nothing could be further from the truth, says Dr. Augusto Zanella. Below in quotes, some key concepts gathered during an IUFRO Spotlight interview.

“Soils – in the forest and elsewhere – involve and affect ‘normal life’. They modify the air we breathe, they influence the climate, impact the food we eat and the water we drink”.

“Soil is not a substrate or a source of nutrients. It is a living matrix that sustains the functioning of every ecosystem”.

“It works like an efficient bank. It capitalizes energy and nutrients to be delivered for building and sustaining more complex and efficient ecosystems. It is a source of new materials, continuously generated from biodegradation and re-elaboration of dead structures”.

“A comparison between natural and anthropic soil systems revealed the importance of the biological structure of soil for understanding and managing how the soil functions. Anthropic soil is that worked by humans in a way to produce new characteristics that make it different from the original natural soil”.

Dr. Zanella, of the University of Padua, Department of Land, Environment, Agriculture and Forestry, and Deputy Coordinator of IUFRO Working Party 8.02.03 – Humus and soil biodiversity, is one of the proponents of Humusica, a concept that looks at soil and soil research from a somewhat different perspective and seeks to provide an international and consistent soil classification system.

“It is a new concept of soil; more biological and connected to the process of natural evolution. It’s soil seen as the place of the endless recycling of structures that grow old and die. Life cannot exist without death. Soil is the conjunction that links the two.”

In a slight digression from the interview, 40-odd years ago, American writer and environmentalist Wendell Berry put it somewhat differently, but seemed to capture some of the essence of what Dr. Zanella and his colleagues believe when he said: “If a healthy soil is full of death, it is also full of life:  worms, fungi, microorganisms of all kinds …  Given only the health of the soil, nothing that dies is dead for very long.”

As part of this new concept of soil, it would be beneficial, Dr. Zanella says, to have a standardized vocabulary and classification system for humus forms. That would be of immense benefit to anyone who works with soil. And, on different levels, that’s pretty well everybody from policymakers to foresters, landscapers, farmers and weekend gardeners, he says.

To that end, he and his colleagues have produced a series of Humusica articles that, among other things, answer “three crucial” questions:

The Humusica papers are presented in the form of a field manual that is “a fundamental tool for assessing everything from land use to climate change,” Dr. Zanella says.

In addition to the publications, there is also a free iOS app – TerrHum – available through the iTunes App Store. It is a University of Padua app that allows the main content of the Humusica 1 field guide to be stored on a cell phone. With this app (an app that is compatible with non-Apple products is currently in development) it is possible to classify all non-submerged forest topsoils on the planet.

He reiterates that this is a new way of looking at soil. “By accepting a concept of soil related to the ‘planet Earth digestive system’, that involves microorganisms distributed everywhere, I better understand myself and the world in which I live.

He adds that, given current global change conditions, soil – and how we humans handle it – will be critical to human survival. Climate change should be a top-of-mind concern, but there seems to be a general lack of consciousness to the danger.

“The current climate warming will probably be the first major trial that conscious humanity has to overcome in order not to perish. The soil will be a crucial resource in that survival process.”

This field manual and classification system (explained in 87 articles, arranged in three Special Issues) can help fight the adverse effects of global change by using the collected knowledge about the biodiversity and functioning of natural (or semi-natural) soil to reconstruct the lost biodiversity and-or functioning of heavily exploited or degraded soils, he says.

The Humusica articles are collected in the Applied Soil Ecology Special Issues Vol. 122 a, 122 b and 123:
https://www.journals.elsevier.com/applied-soil-ecology/special-issues
Information about the Humusica project and publications can also be found on the webpages of IUFRO Unit 8.02.03 – Humus and soil biodiversity: https://www.iufro.org/science/divisions/division-8/80000/80200/80203/publications/